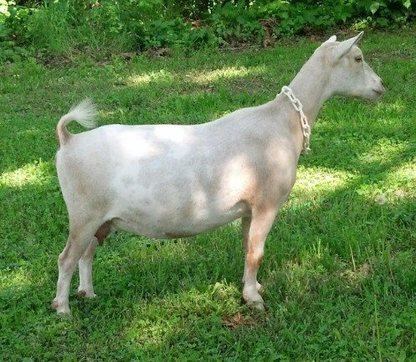 22" at 4 Years Old
Official Linear Appraisal height on 9-22-13
From her breeder at NC PromisedLand:​
​"​​​​​​​​​​Rain Drop is gold & white, with moon spots. She is a deep bodied with an excellent rear end.
Her dam Rain-Beau has one of the best mammary systems in the herd, and RainDrop's udder is just as nice."

Rain-Beau Was Awarded Best of Breed and Best Udder at the Peanut Festival in October, 2012
~ was measured within ADGA height standards.

Rain-Beau was awarded Best in Show in Both Rings
at the Music City Classic ADGA show in Lebannon TN, on May 7th, 2013
~ was measured underheight by both judges

Rain-Beau was measured 1/4" Overheight for her LA in 2010.
But, obviously Beau is within height allowance as she has measured within the allowance
for every show she has attended in the past several years,
including the ADGA National Show in 2013.
She is close, only 1/4" under the stick, but IMO she is not overheight.

a "+S" or "+B" designation will not show up on this pedigree generator,
so I replaced the "+" with "/", so all "/*B" are indeed  "+*B" etc
same for LA Scores, IE for Rain-Beau, her LA Score is V+EE 89
Website Owned , Designed, and Maintained By:
Tara Tickel
Susurrare Salix ~ Whispering Willow
ADGA Registered Nigerian Dwarf Goats
Calhoun, Tennessee
WhisperingWillowNDG@gmail.com